Waking Up White: A Book Recommendation 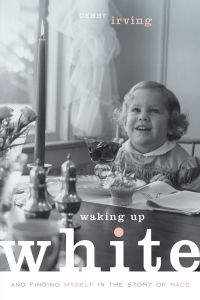 I have been reading and writing a lot about race lately.  The Black Lives Matter movement got me going.  Trump’s presidency stoked the fire of urgency. Over winter break I finished, Waking Up White, and Finding Myself in the Story of Race by Debby Irving. I highly recommend this book.  In fact, I wish every white person would read it.  Irving does such a good job highlighting issues of race that people of color deal with every day, but to which we white people remain oblivious.  Irving’s tone is not teacherly or patronizing, even though she is a diversity educator.  Instead, she is autobiographical and self-effacing.  She shares stories of mistakes she has made in her efforts to become a more racially-aware person.  Some of these stories made me cringe, because I have made similar mistakes.  But the only way to learn is to face these mistakes.  Here are just a few of the valuable lessons I gleaned from this book:

White people need to educate other white people about race.  Honestly, before reading this book, I thought I could only learn about race from people of color. (I’m embarrassed and ashamed to have just typed that sentence.)  White people often fail to recognize that “white” is also a race that we need to understand.  If we can understand whiteness and white culture, then we can better understand the challenges we pose to people of other races when we expect them to act like us, speak like us, learn like us, etc.

Irving, whose suburban upbringing was a lot like my own, helped me identify a variety of beliefs and behaviors indicative of white culture, such as: conflict avoidance, emotional restraint, a sense of urgency about time, a habit of asking social locator questions like “What do you do? Where are you from? Where did you go to school?” to determine what box we should put people or gage the level of success they have achieved.  I am guilty of this white judgmentalism and am determined to break this habit of asking “social locator” type questions.

Fair does not mean equal.  Equality starts with equity.  “Equity,” Irving writes, “means both holding people of differing needs to a single expectation and giving them what they need to achieve it.”  In other words, equity is a way to level the playing field and equality cannot be achieved without it. She illustrated her point with a hypothetical:  If there was a test that involved students writing their answer on a line on the board—a line five feet above the ground—what would you do for the shorter students who couldn’t reach the line?  You’d make the test equitable by giving the shorter students a step up so they could meet the same expectation as the taller students.  Such steps—like affirmative action—level the playing field to make it more equitable.

I am convicted by Irving’s words, realizing that I have lived most of my life as a bystander, as someone who has aided and abetted the system of racism because I was SO unaware and because I lacked the courage to do anything about it.  Irving shares that her ultimate goal is to interrupt racism, advocate against it, and educate without doing more harm than good. Even though I know I will make lots of terrible mistakes, I’m committed to this goal as well.  The burden to right this wrong is on those of us who benefit from this unfair and inequitable system.  Will you join me?  Reading “Waking Up White” with your friends, co-workers, or church groups is a great place to start.

[The Presbyterian Church (U.S.A.) Co-Moderators, Rev. T. Denise Anderson and Rev. Jan Edmiston, have invited churches to read and study this book.  They’ve also published this curriculum to guide and encourage your study.]

3 responses to “Waking Up White: A Book Recommendation”