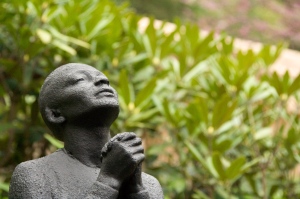 If I just sit here, God, and
try to feel you,
or know You,
in a way I cannot
doubt or explain,
will you come, and
be with me?
Or will my foot that
falls asleep, and
my mind that
begins to write, and
the washer that beeps, because
my laundry is done and ready
for me to dry and fold and put away,
distract me from
all that is You
with me, here
as I sit
and search?

Today I prayed for the man sitting, cross-legged, his back against the street pole at the corner of Michigan and Ohio. He held a cardboard sign like all the other cardboard signs with “Help. Hungry. Homeless.” written in bold, black marker. My prayer began with the man but led me to those who had made me aware of the man as more than just another suffering human. Crouched around him in a semi-circle sat a curious group of youth whose adult did all the talking. “What did you do today?” “Where did you go?” I heard the questions but not the answers as more and more people gathered, waiting to cross the street.

With my eyes fixed on the signal that would tell me when to leave this scene behind, I prayed about the man’s shame, about his being exposed—even more—by this doting group of urban missionaries. And I prayed about the relief I felt he felt as he slipped a new pair of Thinsulate gloves over his stiff, cold fingers—a gift from the group who would soon disappear. And I prayed about the knowledge of poverty, the awareness, the street-weary experience the group craved because I knew that craving too. His story was all the homeless man had. But that was all they wanted. So I prayed for the man to hold on to his story and for the missionaries to move on and for the wind to not be so cold and for the universe to be more right and our problems to be less complex because I didn’t know what else to do.